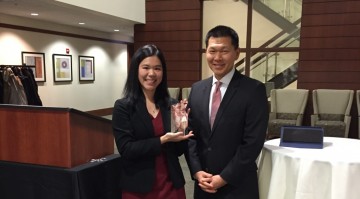 Loevy & Loevy is pleased to announce that Cindy Tsai has been recognized by Loyola University Chicago Asian Pacific American Law Students Association (APALSA) with its Alumni Award of Excellence for her contributions to the law school, the legal profession, and the community. The award was presented by the Honorable Judge Young B. Kim… Read More

On Tuesday, November 19, 2013, Carl Chatman received a Certificate of Innocence from the Circuit Court of Cook County. Mr. Chatman spent 11 years wrongfully imprisoned for raping a woman inside The Daley Center.  There was no physical evidence tying him to the crime. The only evidence against Mr. Chatman was the testimony of his… Read More

Jordan Weissmann The National Law Journal March 08 , 2010   A federal judge in Illinois has refused to dismiss a lawsuit against former Secretary of Defense Donald Rumsfeld by two Americans (pdf) who claimed they were detained and interrogated in Iraq. David Vance and Nathan Ertel, who traveled to Iraq in 2005 to work for a… Read More

By Ben Bradley April 16, 2010 (CHICAGO) (WLS) –The family of a man whose beating by a suburban police officer was captured on camera says they don’t feel safe in Streamwood and are considering moving.  The Streamwood officer is suspended and facing criminal charges. Now for the first time, the public is hearing from a witness.  The… Read More

By Patricia Manson Law Bulletin   Two men who claim the City of Chicago routinely — and illegally — suppresses dissent over the war in Iraq are entitled to use police surveillance records to try to prove their case, a federal judge has held. In an opinion made available Thursday, U.S. Magistrate Judge Arlander Keys… Read More

The Chicago Tribune reports that 18 L.A. sheriff’s officials have been indicted in connection with five different criminal cases. Four grand jury indictments have been unsealed, alleging that deputies at the Men’s Central Jail unjustly detained people, beat inmates and visitors without justification and conspired to obstruct a federal investigation into the misconduct. One indictment… Read More

The Justice Department has joined forces with the Innocence Project and the International Association of Chiefs of Police (IACP) in an attempt to end wrongful convictions, The Washington Post reports.  The organizations have come up with a list of 30 recommendations for police investigations, and the IACP will urge departments nationwide to “adopt new guidelines… Read More